ExcellGene SA, an industry leader in complex recombinant protein expression in CHO cells, joined a consortium of researchers in 2016 to address an unmet need to produce a vaccine to prevent humans from acquiring Ebola Virus Disease (EVD). One of the largest Ebola virus (EBOV) outbreaks had occurred from 2014 to 2016 in Western Africa, which resulted in 28,652 infections and 11,325 deaths. No effective vaccines or treatments were available at the time.

Ebola virus is a Filoviridae family member discovered in 1976 during a disease outbreak in the Democratic Republic of the Congo. EBOV is well known for causing symptoms including severe (hemorrhagic) bleeding, along with fever, gastrointestinal issues, headaches and other symptoms. Most notably, Ebola Viral Disease (EVD) has a high case-fatality rate and can result in multiple organ dysfunction syndrome.

In 2017, ExcellGene and other consortium members joined the EU Horizon 2020 program intending to develop an effective EBOV vaccine. Although funding for ExcellGene was delayed until May 2018, the company contributed upfront resources to support the international initiative, which included researchers in France, Italy, Germany, Switzerland, Tanzania and Benin. In December 2019, the Merck vaccine candidate Ervebo® - Recombinant vesicular stomatitis virus–Zaire Ebola virus, also known as Ebola Zaire vaccine live - was approved by the U.S. FDA after pre-qualification from the World Health Organization and conditional approval by the EMA on November 2019. Immediately afterwards, Marketing Authorisation was given to the Johnson & Johnson vaccine candidate Zabdeno® (Ad26.ZEBOV) by the European Commission (July 2020) and a Pre-qualification was provided from the World Health Organization (WHO) in April 2021. The EU Horizon 2020 program was discontinued in 2019.

While the Ebola vaccine consortium, including ExcellGene, was disappointed in the outcome of the EU Horizon 2020 program, the core concept of using CHO cells to manufacture an Ebola vaccine was successful and highly encouraging for future projects requiring complex recombinant protein production. That is, ExcellGene’s roles of designing gene constructs and using CHO cells to produce an Ebola surface protein (glycoprotein 1,2 and its variant) resulted in sterilizing immunity in mice exposed to Ebola virus. A key to this success was to make trimeric GP 1,2 protein subunits as antigens. 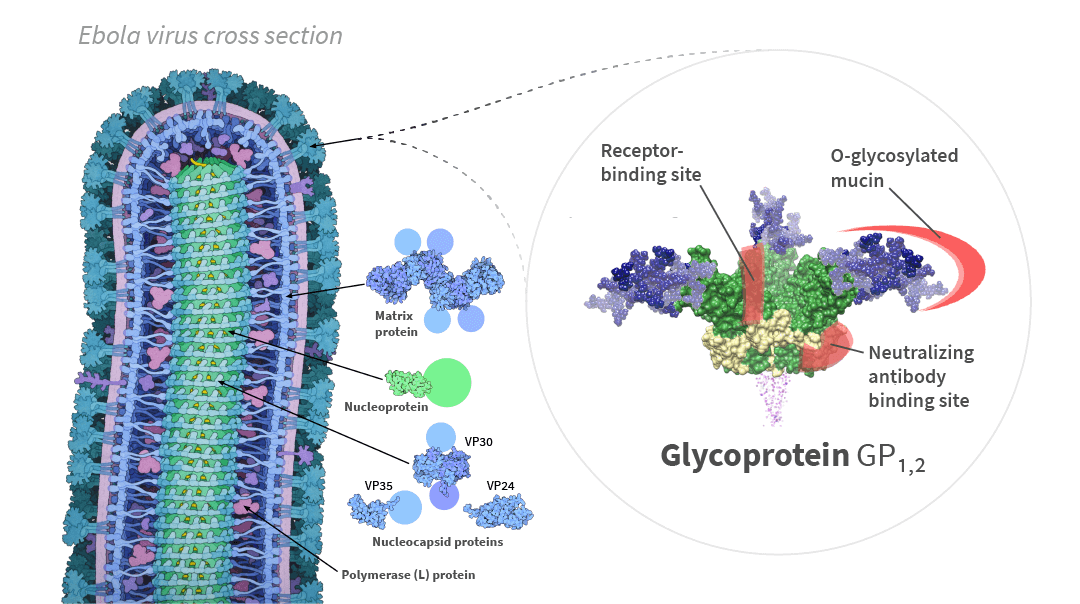 Dr. Florian M. Wurm CSO, ExcellGene
“The research work our ExcellGene scientists conducted on the trimeric Ebola GP 1,2 taught us how to make such a complicated trimeric molecule in CHO cells,” said Dr. Florian Wurm, Chief Scientific Officer and Co-founder. “We were excited to discover that the GP 1,2 protein subunit turned out to be such an excellent antigen, with great potential for human EBOV immunizations.”

Experiments with ExcellGene’s Ebola virus vaccine showed that all non-vaccinated mice got very sick, showing extensive loss in body weight caused by loss of body fluids. Over two-thirds of the unvaccinated mice died within ten days after infection with ebolavirus (see Figure 2 and Figure 3 below). In contrast, all vaccinated mice survived the challenge with ebolavirus. In addition, the vaccinated mice did not develop any Ebola virus symptoms and retained normal body weight. These results were provided by ExcellGene’s fellow collaborators at the Bernhard-Nocht-Institut für Tropenmedizin in Hamburg, Germany. 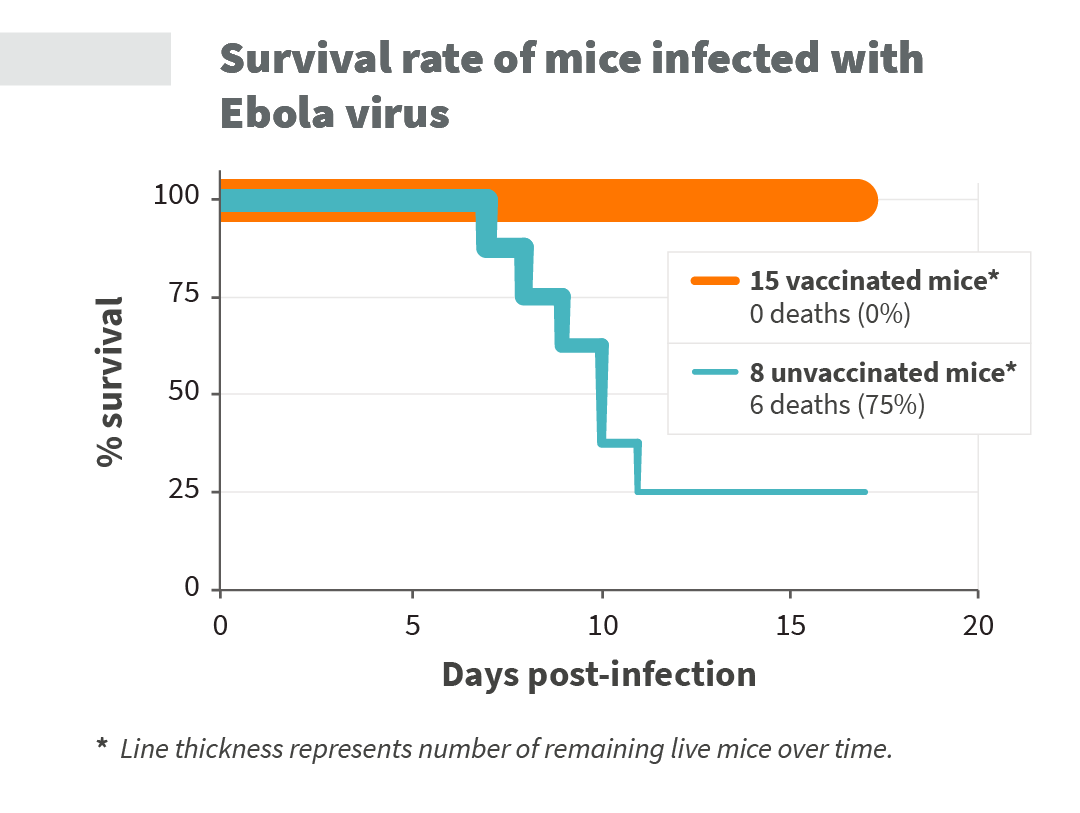 Fig. 2. Survival rate of Ebola virus infected mice over time. The thickness of the line indicatesthe number of surviving mice for each time point. 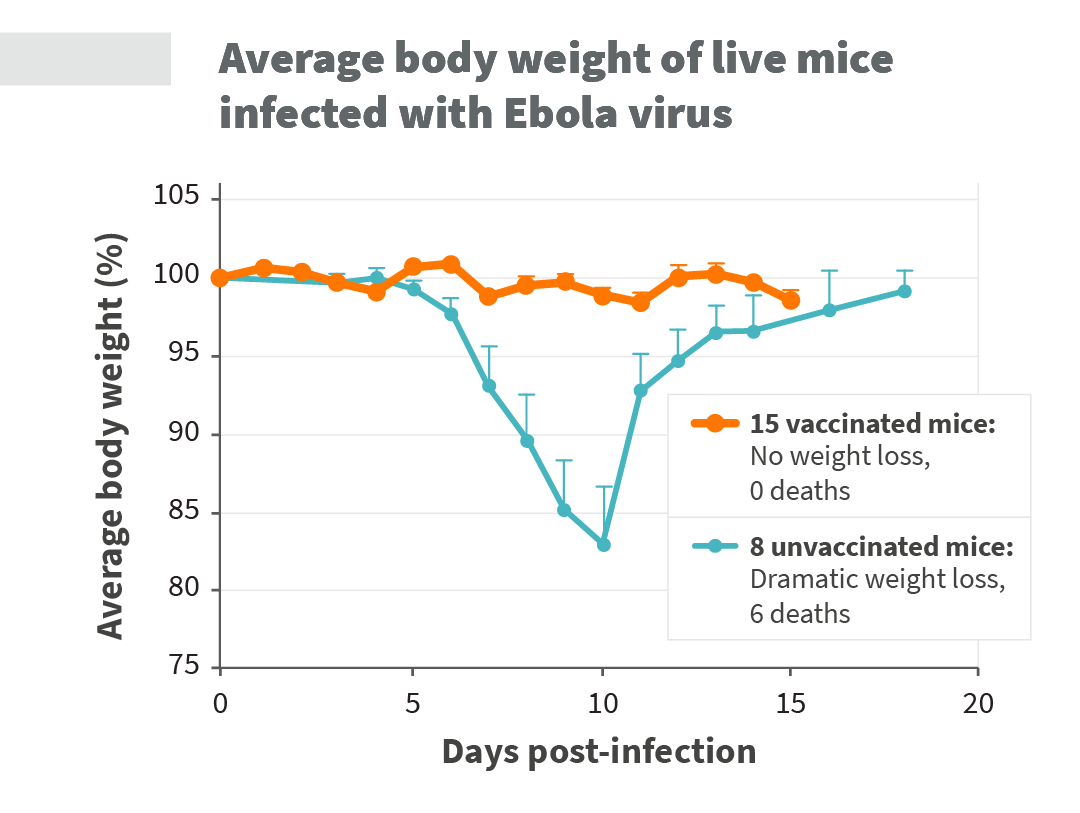 Dr. Wurm stated that a future CHO-derived EBOV vaccine for humans is readily possible, and that advantages include room temperature storage, which could be useful in sub-Saharan environments with limited cold storage. The currently approved Ervibo (rVSV-ZEBOV) viral-construct vaccine from Merck requires storage at -80o F/-62 o C and has a short half-life. He added that even though the WHO declared in March 2020 the end of the Ebola Virus Disease (EVD) outbreak, that future vigilance will be needed to confront new outbreaks with different Ebola variants.

In February 2020, faced with a worldwide unmet need of producing SARS-CoV-2 antigens for vaccines, diagnostics and drug development, ExcellGene’s scientists applied the lessons they learned from producing an Ebola vaccine. A variety of gene constructs was tested and introduced to CHO cells, resulting in a number of optimized cell lines producing SARS-CoV-2 antigens. In several months, trimeric Wuhan-variant spike proteins were produced and shipped to waiting researchers in the USA, Australia, South America and Europe.

Since 2020, ExcellGene has discovered that CHO-derived trimeric spike proteins are extremely responsive to sera of patients who had been infected with SARS-CoV-2, and additional findings support the robust antigenicity of these spike proteins [1,2].

“We are pleased to share these insights,” Dr Wurm said, “so that the life science community is aware that complex, trimeric, recombinant proteins designed on a whiteboard, and produced in months in CHO cells, can elicit sterilizing immunity from, for example, Ebola and Corona viruses.” He added this approach can mean low-cost production for millions of high-quality vaccine doses, designed for specific viral variants, with lyophilization that allows for stable, room-temperature storage conditions.

ExcellGene is a contract development and manufacturing organization (CDMO) dedicated to helping researchers and industry partners who work on vaccines, diagnostics and drug development, by making available high-quality recombinant proteins and high-yielding Chinese Hamster Ovary (CHO) cell-based manufacturing services. The Company, headquartered in Monthey, Switzerland, and its team of 55 located in 16 different countries, is celebrating 20 years of high-quality services in the development and manufacture of therapeutic and vaccine candidate biologics, from DNA to process.

Established in 2001 by Drs. Florian M. Wurm and Maria J. Wurm, as a spin-off from the Swiss Federal Institute of Technology (Lausanne, Switzerland), ExcellGene continues its core focus on innovation and exceptional attention to detail with challenging projects, such as rapid SARS-CoV-2 spike protein production. The Company has served hundreds of clients and pioneered many innovations in the use of recombinant animal cells in bioreactors, and has shared insights and know-how to advance the industry as a whole through well-known publications. ‘Expect Great Science’ is the staple principle underlying all aspects of ExcellGene’s product and customer services. See here for more information. 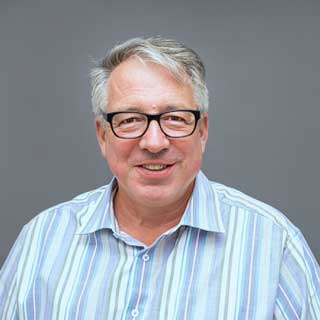